Because this site is a tribute to (and showcase of) the Dancers of San Francisco Ballet, as is the Gala itself, this post will be blissfully celebratory!

SFB’s 2011 Gala presented a well-crafted goody bag of premieres, previews, and favorites showcasing the incredible depth of artistry that is continued proof of the Company’s well-deserved reputation as one of the most diversely talented troupes in the World.

Fiery Cuban flair? I can hear the sizzle from here…

High level of Male Dancers? (Do you even have to ask?)

International stars? Got them too.

A Corps de Ballet that’s amongst the best in the Biz? Oh yeah.

A Company that inspires the most innovative choreographers on the planet? Goes without saying!

Nicole Ciapponi, the young wunderkind first-year Corps Dancer? (Remember her name, folks-not that you’ll soon be able to forget it!) Yes, her too!

SFB has all of that and more.

Each season, SFB Gala is the long-awaited event we hard-core Fans celebrate with immense relief; our long-suffering ordeal of the Company’s ‘off-season’ is finally at an end and we exuberantly rejoice the advent of the new season’s showcase of our favorite Dancers in the world!

While socialites pose for the press and merrily discuss ‘who’ they’re wearing (yawn), true SFBalletomanes exchange banter about the Dancers, Choreographers (you will always see those words with a capitalized first letter on my site, in honor of their artistry) and the season itself. We don’t care if each and every Gala piece is a work of genius (though we cheer if it is!) and we don’t even care if there are a few rocky areas in the performances, because we are there for one reason and one reason only: to show our love and support of the Dancers this site has been dedicated to.

This year’s SFB Gala was a veritable smorgasbord of visual delights and all I’m going to do is briefly summarize the event, show you some wonderful photos, and talk incessantly about Nicole Ciapponi!

It is in the very first piece that the evening’s surprise stunned me silly. In this field of 3 Principal Dancers and a seasoned Corps Dancer (Frances Chung, Jaime Garcia Castilla, Pascal Molat, and Charlene Cohen, respectively), new Corps Dancer Nicole Ciapponi made her presence known.

All of these Dancers were debuting in William Forsythe’s challenging The Vertiginous Thrill of Exactitude, an apt title for a ballet danced as ‘thrill’ingly as it was on this night. Pascal, Jaime, Frances, and Charlene danced their roles as if the ballet was created on them. New Fans should note that this ballet is full of ‘faster than a speeding bullet’ footwork and quick changes of direction and balance that challenge the best of the Company’s technicians: 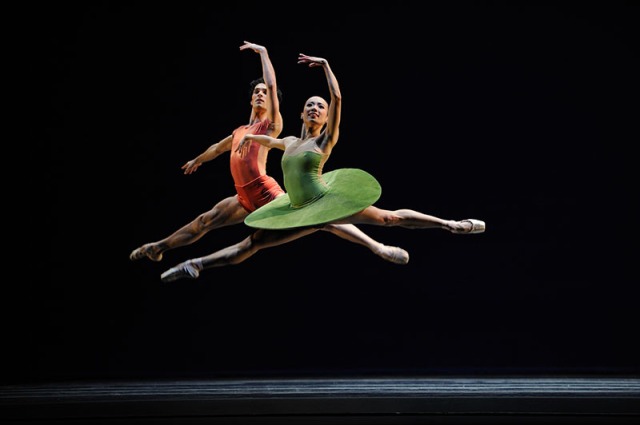 And so it was that my eyes kept wandering, helplessly of their own accord, to the magnetic Nicole Ciapponi, that amazing young first-year Corps Dancer. Not only did she keep up with the rest of the cast, some of the finest Dancers in the entire Company, but she did it with artistry that should be well beyond her years.

Though I had seen Nicole dance, just months ago, in the SFB School’s Student Showcase, her performance in ‘Vertiginous’ was still revelatory to this balletomane’s sensibilities. She reminded me of Maria Kochetkova! And that is not a ‘dig’ at Maria, it is a salute to Ms. Ciapponi.

In ‘Vertiginous’, the Dancer’s upper body must be controlled and fairly ‘quiet’ during much of the ballet’s breathtaking footwork. The feet flash like quicksilver, while the upper body maintains grace and poise. It is Nicole’s upper body that amazed me, even as her feet showcased her amazing ‘petite allegro’ technique.

If I’m not mistaken, the world renown Patricia Barker is her aunt (correct me, DancerPeeps, about the precise family connection) and that famous Ballerina’s coaching is truly evident. As these videos are ‘publicly’ on YouTube, I hope Nicole won’t mind me sharing these remarkable clips for those of you who missed Gala, have approximately 5 and 3/4 minutes to spare, and don’t mind gasping at truly unbelievable talent…in a 14 year old (these videos are a couple years old now!) Dancer who has barely begun to hone her artistry!:

The video clips you just witnessed display undeniable skill, precision, rare control for one so young, and an artist’s maturity well beyond her current status.

(Thank you Helgi Tomasson for your brilliant foresight!)

Val Caniparoli and Yuri Possokhov each crafted a World Premiere well-suited to their chosen Dancers for this event.

Tiit Helimets and Sarah Van Patten inspired Val Caniparoli’s Double Stop, their sinuous flowing limbs well-matched to his ‘poetry in motion’ choreography. It was an exercise of truly expert partnering on both their parts. This pairing had me drooling for their Giselle:﻿

Yuri Possokhov’s piece Talk to Her, choreographed to the music from Pedro Aldomovar’s film of the same name, was an undeniable tribute to Lorena Feijoo and Vitor Luiz, who looked absolutely ravishing in their dramatic interpretation. Yuri’s knack for mining each Dancer’s strengths is a talent we never take for granted and the talent on display, in this instance, was smouldering passion:

The Russian Divertissement from Helgi Tomasson’s Swan Lake was beautifully danced by some of SFB’s most beloved Soloists, Dana Genshaft, Garen Scribner, Hansuke Yamamoto, and the newly promoted Courtney Elizabeth. However, I don’t mind sharing that I don’t think this was the piece I would have chosen to highlight these dancers-the costumes are lovely, but cover up too much of these Dancers’ skills for a Gala showpiece of their many talents: 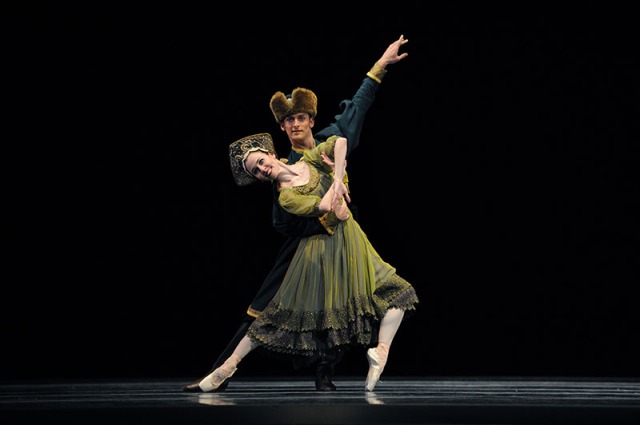 Glamorous Vanessa Zahorian and Taras Domitro shone so brightly in their Don Quixote Pas de Deux, it was impossible to not feel the heat of their fireworks. I’ve said it before-and I’ll say it again-when Taras flies, he hangs in the air for a millenium and just as we begin to believe that he’s so comfortable up there he may never touch down…he does. With absolute precision and finesse. Vanessa’s daredevil courage was something to behold; do you have any idea how amazing her fully stretched positions were as Taras locked his arms and held her sky-high as she rotated? She looked like a star-shaped kite! This pair’s technique, nothing short of spectacular, is perfectly matched to this piece for a Gala event:

I understand there was quite a bit of confusion for some press members, sent to cover an event that was not their forte, because SFB somehow missed listing the Black Swan Pas de Deux from Helgi Tomasson’s Swan Lake in their printed Gala cast sheet. No matter-I’d done my homework (SFB had, in fact, posted the piece online) and talked it up in my pre-Gala post here. So we knew to expect the stunning pairing of Sofiane Sylve as Odile (my evil nemesis!) and Soloist Vito Mazzeo, newcomer to SFB this season, as Prince Siegfried. Odile succeeded in seducing Siegfried once again…and the rest of us, as well. There is a slow simmering and seductive strength to Sofiane’s Odile and it was beautifully matched with the enraptured charm of Vito’s Siegfried, a role he has danced in other productions. Vito’s Prince has an old-world panache and sensibility that rings true in all the appropriate ways. (Note to Mr. Tomasson: Thank you for bringing back the stunning costumes and ‘parlor’ set from your first SFB production of Swan Lake, much more appropriate for a Gala and the Jens Jacob Worsae designs are still much loved here. Alas, there is no Gala photo, but I hope to feature Vito soon on Odette’s Ordeal…)

Yuan Yuan Tan and Damian Smith did what they do best together in Edwaard Liang’s Somewhere in Time (music by Ravel), which made its San Francisco Ballet premiere this Gala performance. These two Dancers are often paired together in contemporary pieces and Damian’s strength in partnering is 2nd to none. One of Damian’s truly magnificent qualities is his ability to ‘isolate’ independent parts of his anatomy, something more often seen on Modern or Jazz Dancers. The Dancers of SFB are all highly skilled in their capacity to absorb varied dance styles into their body memories, a fact that attracts a bevy of world renowned choreographers by the dozen. So it’s not that Damian is alone in his ability to perform the works of Liang, Christopher Wheeldon, and Margaret Jenkins-it’s that he does it so well. Damian paired with Company favorite, the lithe and lovely Yuan Yuan Tan, in a contemporary piece-what’s not to love?: 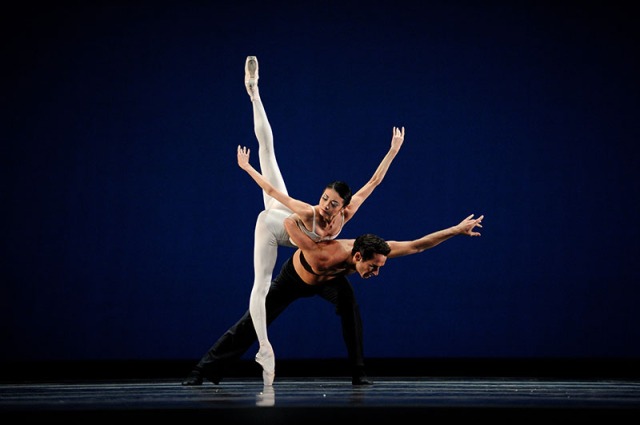 Yuan Yuan Tan & Damian Smith in Liang’s ‘Somewhere in Time’; © Erik Tomasson
(^How does she do that so prettily? Torqued arabesque with the supporting leg en pointe in parallel?, upper body parallel to the floor with an en face-ish wing span and the working leg turned out? It almost looks like a ‘spiral’ position in skating terms, doesn’t it?)
John Neumeier’s New Pizzicato Polka  (or is it Neue Pizzacato Polka as SFB previously listed online?) was a giggle of a Buster Keaton-esque perfect little Gala caper with Vanessa Zahorian, Taras Domitro, and Jaime Garcia Castilla…complete with top hats and music by Johann Strauss Jr: 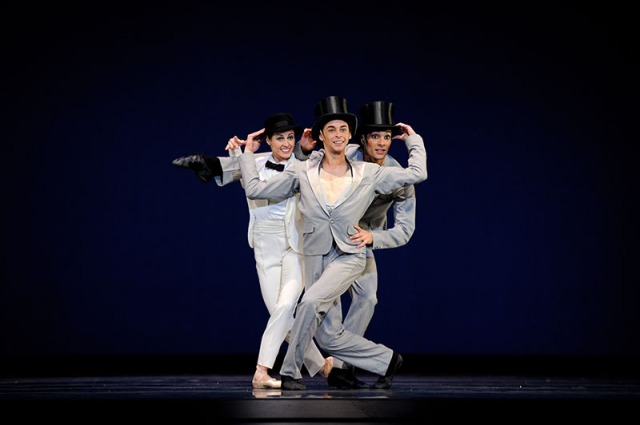 The evening’s finale was what everyone expects in a Gala  performance: a ginormous extravaganza, of proportions only a George Balanchine neoclassical white-tutu’d ballet could create, Balanchine’s Symphony in C. 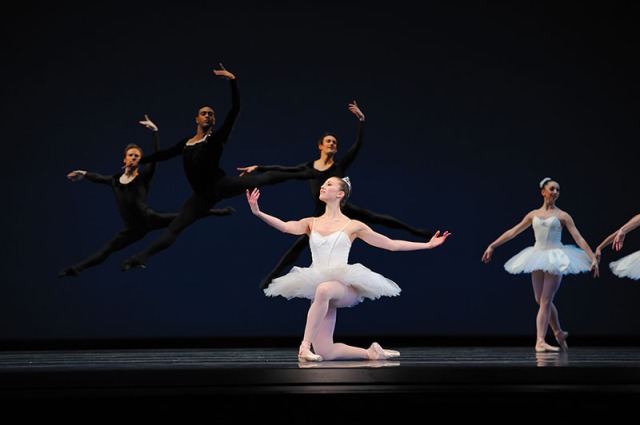 Thank you for your patience with my learning curve!

﻿I’ll be reporting next on the 1st 2 Giselles of the season, as well as featuring a ‘special’ to Odette’s Ordeal, my Reflections correspondent’s report on that Brilliant Bolshoi Ballerina Blowout!

See You at the Ballet!