Napa Valley’s Festival del Sole is now a summer cultural destination, its 6th season boasting another extraordinary concert series of world class musicians (Sarah Chang, The Emerson String Quartet, and The Russian National Orchestra being the headliners in 2011) and singers (Charice, Babyface, Ruben Studdard, The Canadian Tenors, and more Opera singers than one can shake a conductor’s baton at), performing over a period of ten days.

With the festivities held amidst wine tastings, our famed fresh California Cuisine, and located at some of the most picturesque venues one could wish for (think ‘Meadowood’, ‘Castello di Amorosa’, ‘Grgich Hills Estate’, and the ‘Robert Mondavi Winery’)….

what more could a culture vulture dream for?

You got it (all together now): “World Class Ballet.”

And that they now have.

I have been fortunate to attend both seasons of Festival del Sole’s ‘Stars of American and Russian Ballet’, a Gala type evening sponsored by (and thanks to the astute vision of) Fine Arts Museums of San Francisco board Chairman (and part-time Napa Valley resident) Dede Wilsey. Both years I have come away feeling I had just received a Ballet ‘fix’, an evening fit to satiate even the thirstiest Balletomane during San Francisco Ballet’s l-o-o-o-n-g dry off-season from May to ‘Nut’ (Nutcracker).

Let it be said that SFBalletomanes now have two events, including the eagerly anticipated annual free performance at Stern Grove, at which to celebrate their favorite company during the summer; Stars of American and Russian Ballet has once again presented a triumphant evening of Ballet riches featuring some of the finest Dancers in the world.

Performing in their second year at Festival del Sole those fine Dancers just happened to include San Francisco Ballet’s incomparable Lorena Feijoo and her fiancé SFB’s Vitor Luiz, already a fans’ favorite in his 3rd year with SFB.

Add to the mix the great gifts of husband and wife team Maxim Beloserkovsky and Irina Dvorovenko of American Ballet Theatre, Charles Askegard and Wendy Whelan of New York City Ballet, and Marianna Ryzhkina, Denis Medvedev and Mikhail Kryuchkov of Bolshoi Ballet, and you’ve got one powerful recipe for success.

On 7/22/11 at 6 pm, the evening began with New York City Ballet’s Charles Askegard and Wendy Whelan in George Balanchine’s iconic ‘Diamonds Pas de Deux’ from ‘Jewels’. To observe Whelan as Balanchine Goddess is an eye opener. These two Balanchine Dancers danced this familiar piece with such unmannered beauty and devotion as to cause one to reconsider one’s list of favorite ballet moments. More than a flashy jewel, their interpretation came across like a prayer. 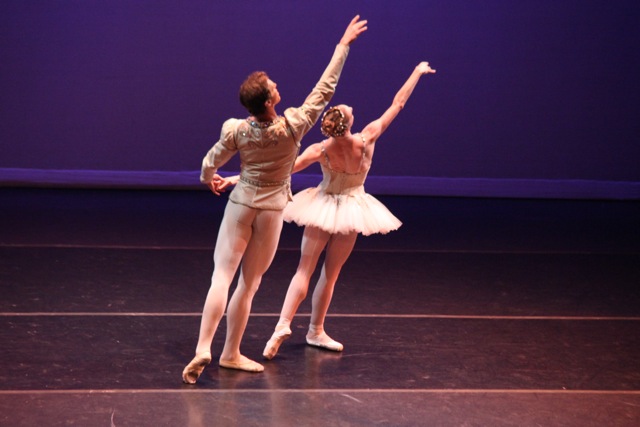 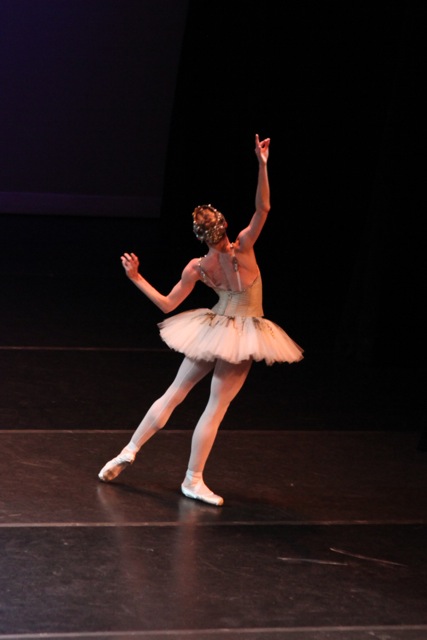 The second ballet of the evening garnered the biggest ovation of the event and featured San Francisco Ballet’s passionate pair (on stage and off) Lorena Feijoo and Vitor Luiz in Yuri Possokhov’s sultry Talk to Her, which was created on them and premiered at SFB’s 2011 Gala to great critical acclaim, as much for its luscious sensual choreography as for its lyrical suitability to these artists. Seeing it again was seeing it anew, for they danced it even more beautifully than at SFB’s Gala. 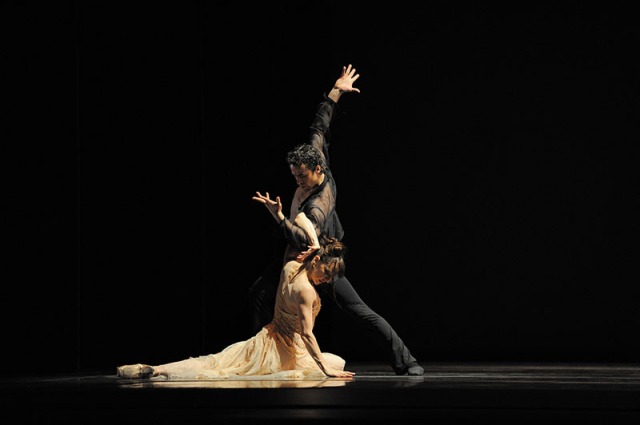 From the moment these artists appeared in the spotlight, they beguiled every pair of eyes in the intimate theater with the force of their magnetism. The ballet sang to me and joined my list of ballets that I cannot see too often. The cheers shook the foundations when the couple showed their mutual affection with a brief kiss during their curtain call.

When the Bolshoi duo Marianna Ryzhkina and Denis Medvedev took the stage next, it was for the Bournonville classic pas de deux from ‘La Sylphide’. Medvedev made a charming James for Ryzhkina’s Sylph and though the pair were delightful, they would ‘wow’ me later in the evening in a more dramatic display.

Up next was the married team from American Ballet Theatre (Russians both), Maxim Beloserkovsky and Irina Dvorovenko, in what was easily the audience’s second favorite of the event, Petipa’s ‘Black Swan Pas de Deux’ from ‘Swan Lake’. To see this pair deliver all the drama and spectacle of the most famous part of ‘Swan Lake’s’ Act 3, was to be aware that these are Artists at the top of their chosen Art. Dvorovenko’s technique was so flawlessly tuned to her character (‘Odile’, the infamous Black Swan decoy) that she actually conjured the presence of Von Rothbart, merely using suggestive glances at the invisible and evil sorcerer that contols her. Nope, he wasn’t there. And yet he was. The expansiveness of her wing span reminded me a bit of the great dramatic ballerina, former ABT Principal Dancer Martine Van Hamel.

Beloserkovsky played the perfectly seduced Prince Siegfried with nobility and adoration; his partnering of his favorite ballerina was as expected-he anticipated her every minute weight shift and presented her to perfection. It doesn’t hurt that this couple is absolutely breathtaking in visual appeal.

After an intermission spent chatting with fellow Balletomanes, the Bolshoi trio of Marianna Ryzhkina, Denis Medvedev, and Mikhail Kryuchkov took to the stage for the U.S. Premiere of Vladimir Vasiliev’s ‘Adagio and Trio’ from ‘The Oath of Ushers’. Honestly, I have no clue what it’s about (I will happily accept my readers’ input)-I only know that I was spellbound.

We always eagerly anticipate a piece we haven’t seen before and ‘The Oath of Ushers’, set to a movement of Gordon Getty’s ‘Ancestor Suite’, was one which had debuted with verve at the Bolshoi Theater in 2009. This excerpt left me yearning for more.

NYCB’s Charles Askegard and Wendy Whelan returned to the stage for Balanchine’s edgy and athletic ‘Agon’, another favorite of SFBalletomanes. Though its off-kilter lines and partnering manipulations can seem mannered in execution, these Balanchine Masters did their utmost best to deliver unfettered pure Balanchine-Dance for Dance’s sake-to an audience already very familiar with this ballet.

It seems as though Beloserkovsky and Dvorovenko could do no wrong on this evening of delectable pas de deux’. Their light as air ‘Les Sylphides’, choreographed by Fokine,  was musically fused to the Chopin that accompanied it. I found myself wishing for live music, but the artistry of this couple is unsurpassed in loveliness of lines and lifts.

When our newly engaged SFB pair, Lorena and Vitor, came out for the finale, we found ourselves treated to the Pas de Deux from Petipa/Mazilier’s Le Corsaire. For those unfamilar with this Pas de Deux, it is a popular Gala piece and competition choice in classical Ballet repertoire, showcasing both dancers’ most exciting skills (yes, there’s even a little leeway for them in their individual variations)…and this pair can deliver when it comes to jaw-dropping technical bravura.

But let me backtrack a moment…

Vitor is an exciting  dancer and strong partner for his lady love and he and Lorena thrilled us in their ‘Don Quixote Pas de Deux’ at this event last year with some of the finest gravity defying feats I’ve witnessed to date. He executed some spine-tingling revoltades in that Don Q variation, if I’m not mistaken, and then launched Lorena into the air with such astounding vigor that many in the audience (myself included) gasped aloud. To quote a friend who accompanied me to last year’s performance, “He tossed her into the air and sometime later in the evening she came down again”. Of course, this followed some amazing one-armed lifts and carries of his brave ballerina beauty. I’m telling you-and I am not an easy sell, that their performance was spectacular.

This year’s ‘Le Corsaire’ was danced a little ‘safer’, without quite as many risks and tricks, but still breathtakingly lovely to behold. (How I wish there were photos!). Lorena looked like a vision in one of the most elaborate tiaras I’ve ever seen and her delicate pointe work turned her into our dream of what a Ballerina should be.

In spite of their rapturous finale, it was their first piece that reigned in my heart.

One never knows when a Dancer’s performance will become one of our most loved ballet memories of all time, but Lorena and Vitor’s 2011 Festival del Sole’s performance of Yuri Possokhov’s ‘Talk to Her’ has most definitely claimed that honor.

My one complaint (other than the taped music, but I understand budgetary concerns) is that this evening of star studded Ballet was over too quickly. Methinks the post-performance dinner could be postponed a mere half hour in the future, so that the Ballet Gala might continue to beyond its current less than 2 hours (including intermission) length.

Here’s Lorena Feijoo (from SFB’s web site) on the joy of dance, her special professional relationships with former SFB Principal Dancers and choreographers Yuri Possokhov and Val Caniparoli, and how SFB Principal Dancer Vitor Luiz proposed to her on Valentine’s Day, 2/14/11: