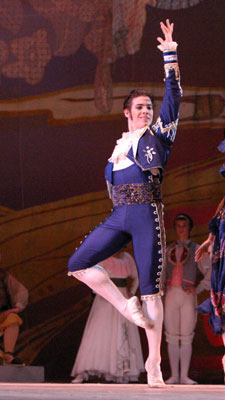 On the cusp of its 2012 Gala, San Francisco Ballet welcomes a new male Soloist to its roster. Prior to joining the Company, Carlos Quenedit, who hails from Havana, Cuba, trained and danced with the National Ballet of Cuba, Miami City Ballet, and Ballet de Monterrey in Mexico under the Artistic Directorship of Luis Serrano, also a graduate of the School of the National Ballet of Cuba. Throughout his career, Mr. Quenedit’s repertoire has included major roles in Don Quixote, Coppélia, Swan Lake, Giselle, The Nutcracker, Allegro Brillante, Symphony in C, Tchaikovsky Pas de Deux, The Four Temperaments, Concerto Barocco, Diana and Actaeon, In the Night, Liturgy, and Ballet Imperial, to name a partial ballet resumé.
Quenedit came to the U.S. in 2008, following in the footsteps of another SFB (Principal) Dancer (and high-flying favorite with SF Balletomanes), Taras Domitro. Both dancers defected from their Cuban homeland (Taras in Canada, Carlos in Mexico), motivated by the desire for-and challenge of-greater artistic opportunity, and sought political asylum in the U.S. shortly thereafter (Taras rather immediately and Carlos after a year with Ballet de Monterrey in Mexico, if I’m not mistaken).

With the bevy of world renowned choreographers that flock to set their ballets on SFB’s versatile dancers, thus creating one of the ballet world’s most fertile hotbeds of creativity, a veritable dancer’s paradise, it isn’t any wonder that Carlos is joining so many of his compatriots here in San Francisco. SFB is already ‘Ballet Home’ to four of Cuba’s finest dancers: Joan Boada, Lorena Feijoo, Taras Domitro, and, perhaps most notably, Jorgé Esquivel, former superstar of the National Ballet of Cuba, long-time partner of the legendary Cuban ballerina Alicia Alonso (also NBC’s Artistic Director and founder), and now a valued SFB faculty member (he teaches the highest Boys’ levels-7 and 8) and Principal Character Dancer.
While SFB offers the delectable smorgasbord of both contemporary and classical repertory that the Cuban dancers in exile crave, SFB gains something incredibly valuable in return: the incomparable port de bras, bravura, mercurial feet, dramatic stage presence, and passionate attack, that is the Cuban Ballet style.
And we are the honored beneficiaries.
While we’re waiting for ‘Odette’ to finish her exclusive interview with Carlos (oh yes she IS!), here’s a wonderful 9 minute video clip/text break to help us get acquainted:
As a celebrated guest artist, Quenedit has also performed with the Cuban Classical Ballet of Miami, almost a prerequisite for all the exiled Cuban dancers whose first stop in the U.S. is with Taras Domitro’s mother, Magaly Suarez, its former Co-Artistic Director with Pedro Pablo Pena; her open home, generous tutelage, and loving mentoring help them in their career transition, in addition to giving them the opportunity to perform, while they adjust to their new home.
The Royal Winnipeg Ballet also boasted his guest performance as their Nutcracker Prince a year ago.
Oh…and one more thing:

Mr. Quenedit was most recently the chosen ‘Basilio’ for opening night of Yuri Possokhov’s new Don Quixote for the Joffrey Ballet. Yes, that would be our Yuri Possokhov, former Bolshoi and San Francisco Ballet Principal Dancer and current SFB Choreographer in Residence, who just happens to be the Co-choreographer, with Helgi Tomasson, of San Francisco Ballet’s own upcoming 2012 Don Quixote season finale.

Do we dare hope that Mr. Possokhov, who has already worked with Mr. Quenedit in Chicago and whose extraordinary talent has never failed to produce a ‘hit’, might bestow a featured role on our new Cuban here in his new Ballet Home?

If any of you have seen our new Soloist live, I would greatly appreciate your comments!

For the rest of us: Odette’s exclusive Carlos interview is coming.

To a digital device near you.