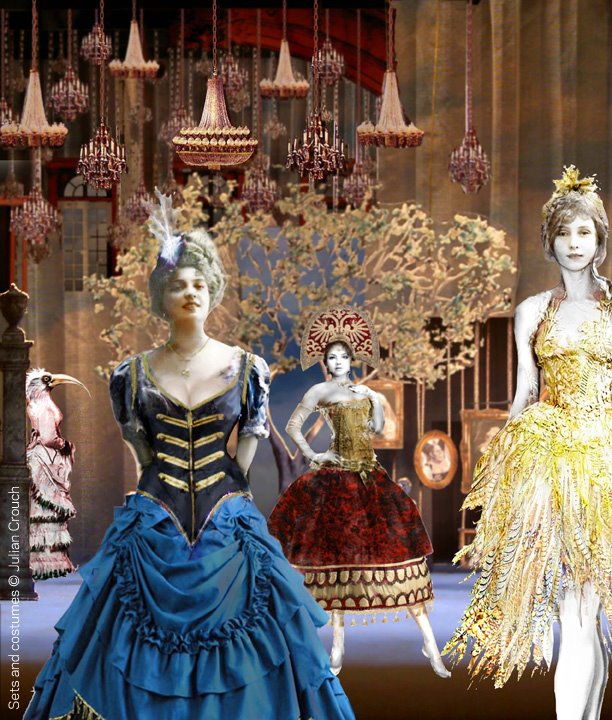 Costumes & Sets for Wheeldon's 'Cinderella' by Julian Crouch; the gold one on the right is for 'Cindy', herself

Christopher Wheeldon is creating a spectacular new ballet version of the most popular fairytale in the world: Cinderella. San Francisco Ballet and the Dutch National Ballet will co-produce this new creation by one of today’s most sought-after and innovative choreographers. The world premiere of Cinderella will be performed by the Dutch National Ballet on December 13, 2012 at The Amsterdam Music Theatre, while San Francisco Ballet will present the U.S. premiere of the work during its 2013 Repertory Season at the War Memorial Opera House.

“We are thrilled to present such a creative and masterful interpretation of Cinderella by Christopher Wheeldon next season,” said SF Ballet Artistic Director & Principal Choreographer Helgi Tomasson. “We value our long-standing relationship with Christopher and are pleased to collaborate with our colleagues at Dutch National Ballet to co-produce this work which I know our audiences will enjoy.”

Wheeldon’s enchanting interpretation of Cinderella, set to the music of Sergei Prokofiev, is based on the story by the Brothers Grimm. In this version, Cinderella plants a hazel branch on her mother’s grave, and it grows into an enormous magical tree. Along with four spirits, the tree grants all of Cinderella’s wishes. Wheeldon gives depth to the story’s characters by portraying Cinderella as more than a victim; the prince plays a bigger role than in other productions.

The sets and costumes are by the British designer Julian Crouch, renowned for his designs for Philip Glass’s masterpiece Satyagraha for the Metropolitan Opera in New York and the Broadway musical The Addams Family, among other works. For the latter production, he received a Drama Desk Award, one of the most important theatre awards in America. Locally, Crouch served as associate director/designer for Shockheaded Peter, which was performed at San Francisco’s American Conservatory Theater in 2000. Cinderella is his first ballet production.

The production will also feature some very special stage effects: Wheeldon and Crouch have opted for an almost cinematographic approach that will turn the thousand-year-old fairytale into a unique 21st-century experience.

Cinderella is made possible, in part, by the generous support of the sponsors of San Francisco Ballet’s New Productions Fund:

SF Ballet would like to thank the Rudolf Nureyev Dance Foundation for its leadership role in launching the New Productions Fund.

San Francisco Ballet
As America’s oldest professional ballet company, San Francisco Ballet has enjoyed a long and rich tradition of artistic “firsts” since its founding in 1933, including performing the first American productions of Swan Lake and Nutcracker, as well as the first 20th-century American Coppélia. San Francisco Ballet is one of the three largest ballet companies in the United States. Guided in its early years by American dance pioneers and brothers Lew, Willam and Harold Christensen, San Francisco Ballet currently presents more than 100 performances annually, both locally and internationally. Under the direction of Helgi Tomasson for more than two decades, the Company has achieved an international reputation as one of the preeminent ballet companies in the world. In 2005, San Francisco Ballet won the prestigious Laurence Olivier Award in the category of “Outstanding Achievement in Dance” and in 2006, it was the first non-European company elected “Company of the Year” in Dance Europe magazine’s annual readers’ poll. In 2008, the Company marked its 75th anniversary with a host of initiatives including an ambitious New Works Festival. Recent highlights include a tour to the People’s Republic of China, the celebration of Artistic Director & Principal Choreographer Helgi Tomasson’s 25th anniversary with the Company, and the United States premiere of John Neumeier’s The Little Mermaid, which was broadcast internationally, as well as nationally on PBS’s Great Performances “Dance in America” in December 2011.