A Belated Fond Farewell to San Francisco Ballet’s Erin McNulty (and Other Outgoing Talent) and a Warm Welcome to SFB’s Newest Dancers (oh, and an ‘Homage to Helgi’, as well)

Surprise! There is a link to a sneak peek at one of Odette’s exclusive San Francisco Ballet dancer photo shoots somewhere below.

(“But first this special message…”)

Every year, San Francisco Ballet acquires new talent, attracting some of the best dancers, of all levels, from the world’s most highly esteemed ballet companies and schools. The ability to spot (as in discover, not the dancerly focus on one visual point while doing piqué turns), train, and/or bring in some of the brightest stars in the ‘Ballet Biz’ is one of the reasons Artistic Director Helgi Tomasson is more valuable than his weight in gold at SFB…and that’s saying something in today’s gold market, trim though the man still is. In the past two decades, he has helped build this international company of Artists (yes, capital ‘A’) into one of the most highly respected and stylistically versatile ballet troupes on the planet.

One of the most distinguished staff members that Mr. Tomasson brought in, to mold SFB’s identity into a company worthy of a position ‘in the big leagues’, was Lola de Avila, Associate Director of the prestigious SFB School, who has just, unfortunately, announced that she is stepping down from her long and exalted post at SFB. The press release announcing her plans and her successor, Patrick Armand, is here.

With its stylistically diverse and multi-disciplined collective ‘technique’, lauded by even the harshest of critics (SFB arguably flaunts the fleetest precision of feet known to Ballet, though Tina LeBlanc’s quicksilver petite allegro is still sorely missed), the company Helgi helped put on the global ballet map also boasts many fine dance actors/actresses-those with the ability to make even the most jaded of  balletomanes perform the famous variation known as the ‘Blink & Wipe’. (The ‘Blink & Wipe’ is a move that is usually executed en face to the stage, can be done from left to right or right to left, and is a motion solely used to clear one’s misted vision as quickly as possible so one can continue to watch the people onstage who are responsible for its creation.)

(It is also particularly effective when performed by the entire audience as an ensemble. À la Mark Morris. Preferably in Mizrahi designed unitards.)

(Doubt me? Seen Romeo & Juliet or Giselle lately? Certainly The Little Mermaid is responsible for many an instance of the ‘Blink & Wipe’. I mean, truly, if you say you didn’t cry at the end of TLM or R & J, you’re lying. Or pathetically out of touch with your inner Mermaid or Bard, as the case may be. Shame on you.)

Mr. Tomasson has surrounded himself with those capable of helping him shape the company into one which lures nearly every living choreographer I can think of (and quite a few from the other category as well-choreographers, you know which group you belong in…), and one which boasts an elite roster of Principal Character Dancers, Ballet Masters and Artistic Staff, and Faculty. Many of its finest Artists, from both the Smuin and the Tomasson years, when speaking in terms of recent SFB history, have continued their dance careers as Choreographers (Julia Adam, Val Caniparoli, Yuri Possokhov, and Yuri Zhukov are fine examples), Artistic Directors (Mikko Nissinen at Boston Ballet, Christopher Stowell at Oregon Ballet Theatre, Ashley Wheater at The Joffrey), and Ballet Masters (Anthony Randazzo at Boston Ballet, Nicolas Blanc celebrating his new position at The Joffrey, and Katita Waldo, Betsy Erickson, and Anita Paciotti at SFB, to name but a few). Some of SFB’s dancing elite have chosen to share their ample knowledge as Faculty (Evelyn Cisneros at Boston Ballet; Tina LeBlanc and sister Sherri LeBlanc, Pascale Leroy, and Parrish Maynard all here at SFB-even current SFB Principal Sofiane Sylve is also ‘guest teaching’ at SFB), passing the torch to those eager to follow in their footsteps.

We SFBalletomanes (Odette’s readers, natch) never needed to be told-we can recite it in unison now, can’t we? Since Helgi Tomasson’s arrival, San Francisco Ballet has become a (all together now):

Well, a nickel to whoever said it first and a penny to everyone who repeated it since. But it wasn’t the ‘press’ who started it…the ‘press’ heard it from the fans. Those who stood in the back of the house for multiple performances of each (mostly) well-crafted new program, those who bought seats and could barely believe the beauty before their eyes and came back for more, those wanting-needing-to see each and every cast-those people were who said it first.

Those People (I like to call them “Odette’s Peeps”)

Those people were witnessing the evolution, performance by performance, of a terrifically innovative regional company as it slowly, but surely, morphed into-you got it-that great “world class company” we so proudly exclaim about, as if it were our own personal creation.

Well, we do. SFBalletomanes (Odettespeak that needs no translation) are those who frequently toss out such important (and very scientific sounding nuggets) as “SVP & PFV 3/7/12″…or debate such tantalizing arguments as “Masha & Joan, Masha & Gennadi, or Masha & Vitor?” or “Lorena & Joan or Lorena and Vitor?”. Yep, we make the Raider Nation look like wimps (a claim I am more entitled than most to make, as those will attest who know a bit about my personal dance journey); SFBalletomanes are some of the hardiest fans I know.

And, boy, do we have stories. (Dancers, beware!) Remember the time ***’s wig got caught on ***’s button and came off? Or the time ***’s skirt got stuck on her head (ok, that was this year)? What about when ***’s scarf got all tangled up? Or when *** almost dropped ***? And when ***’s hair wouldn’t come unpinned when it was supposed to and she was still struggling with it long after she was on the ground and supposed to be still? Or the night before, in the same ballet, different dancer, when ***’s hair came undone before it was supposed to, and the clip kept hitting *** in the face during her pirouettes? Remember how difficult it was for him not to laugh? And when ***’s gun didn’t go off, but *** died anyway?

Oh yes, we SFBalletomanes have tales to tell.

But that’s another story, so back to the Helgi…

But he and his star studded staff didn’t do it alone.

He hired some of the best dancers on earth.

‘Farewell to Some of the Best Dancers on Earth’

Each and every year a strange phenomenon takes place; some of the best of these best dancers on earth, some of our most beloved favorites, quietly leave the Company with little to absolutely no fanfare whatsoever. Yes, there are the special Farewell Galas for the big names when they retire-rare and each one worthy, no argument from me there-but what about those unheralded dancers who have also given their blood, sweat, and tears to make San Francisco Ballet the company it is today?

Sadly, many beloved (and talented) favorites have moved on and I would like to thank all of them for their part in building a company SFBalletomanes can be proud of. Recognizing that one could go on forever if one started going back in SFB history, I decided to concentrate on last season:

We barely got a glimpse of Artem Yachmennikov’s noble stage presence before he retired from the company, due to recurring injury issues that had been plaguing his career, as he informed Odette. I was fortunate to see him in Helgi Tomasson’s 2010 Nutcracker, then elegantly partnering Sarah Van Patten, last season, in Balanchine’s Symphony in C for SFB’s 2011 Gala, and then his final one and only season performance, in Program 1 as Count Albrecht, partnering the exquisite Yuan Yuan Tan in Tomasson’s 2011 opening night Giselle. I can’t help but feel this as a great loss and am saddened by his compatriot Elena Kazakova (Corps de Ballet) also leaving the company. 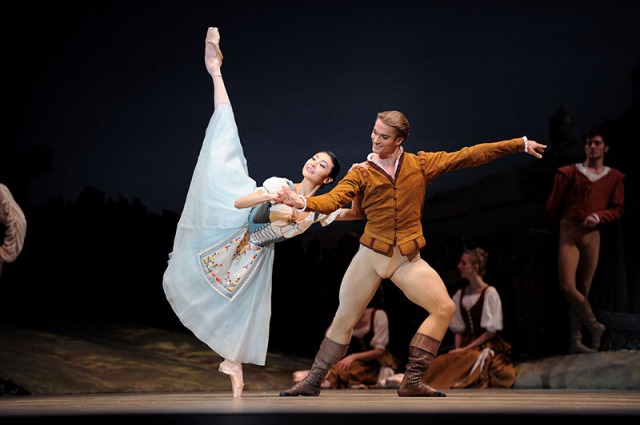 Also leaving SFB after an illustrious dance career of 12 years with the company is Erin McNulty, who began as an Apprentice in 1999. Erin was one of the finest SFB Corps de Ballet Dancers the company has been fortunate to have and I will most fondly remember her in the following:

The stoic ‘Lady Montague’ in Tomasson’s Romeo and Juliet

Her ‘Demi Soloist’ roles in each of Balanchine’s Jewels (Diamonds, Emeralds, and Rubies)

(not to mention her many other Balanchine roles)

her absolutely unforgettable and hilarious portrayal of

The ‘Wife’ in Robbins’ The Concert.

Wishing you well in the next phase of your life’s journey, Erin. Thanks for the many memories of your beautiful dancing.

Many of you are wondering what the new ‘face’ of SFB will look like, though we are already halfway though the 21012 season.

Let’s look at what has changed since SFB’s 2011 season.

(^This is IT! This is the surprise! ^ Click on Victoria’s name^ above for a sneak peek at some of the most gorgeous ballet photos-and one of the most beautiful ballerinas-you’ve ever seen, shot on location in San Francisco, by the mega-talented dance photographer, Brian Mengini, exclusively for Odette’s Ordeal and Brian Mengini Photography! Victoria will soon be featured in an upcoming interview on Odette’s Ordeal, with the rest of the photo shoot, but Odette wanted to reward her loyal readers for their patience by sharing these stunning images before she even edits the interview. Prior to today, no one has yet seen these gorgeous photographs; it was a very magical shoot resulting from our first-time collaboration and Odette hopes your jaw drops like hers did at the results.  )

Carlos Quenedit (who got his own feature on Odette’s Ordeal here, and will also be highlighted in an upcoming interview)

12 Responses to A Belated Fond Farewell to San Francisco Ballet’s Erin McNulty (and Other Outgoing Talent) and a Warm Welcome to SFB’s Newest Dancers (oh, and an ‘Homage to Helgi’, as well)